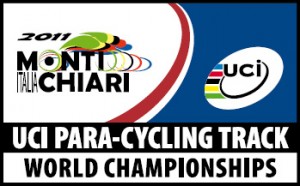 Three days of staggeringly good competition drew to a close yesterday (Sunday March 13) at the Para-Cycling Track World Championships in Montichiari, Italy, with Great Britain ending top of the medal table with nine gold, eight silver and a bronze. Amongst the victors were service veterans Jon-Allen Butterworth and Terry Byrne both of whom were making their World Championship debuts having retrained through the “Battle Back” scheme for injured tri-service personnel. Butterworth set a new world record with a win in the 1km time-trial (C5 category) with a finish of 1’7.615”, whilst Byrne took silver in the C4 category 1km pursuit behind his team-mate Jody Cundy who set a new world-record with 1’05.144”

The final Team GB gold came in the Team Sprint (Darren Kenny, Tel Byrne, Jody Cundy) who, having set a new world record in the qualifiers, upped their game still further in the final to beat China. The stunning all-round results have not only boosted the confidence of the British team but also earned valuable qualify points towards the Paralympics for London 2012.