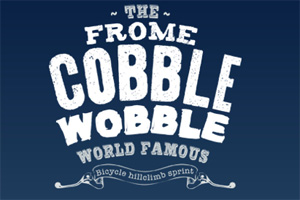 The Giro d’Italia, the Tour de France, the Vuelta a Espańa. The greatest cycling spectacles on the planet? Well maybe, but only if you’ve never been to Frome and witnessed first-hand the blood, sweat and tears that is…The Cobble Wobble. The annual event, held against the backdrop of 17th century buildings and chocolate box village life, is an individually timed bicycle hillclimb sprint up the bone-judderingly cobbled Catherine Hill – a total of 179 yards – which sees riders from near and far (mostly near, it must be said) battling it out for the title “King of the Cobbles”. Various categories give a fair crack to all age ranges, with the top 20 riders from the day’s action moving forward to go head-to-head in the “Charge Bikes King of the Cobbles” final.

Organisers point out that “it’s not all about being fast” (although Cyclo would like to counter-point that it is if you want to win…) and encourage a whole lot of dressing up of both riders and bikes. Take a look at just how deadly serious things get with the video below. Unfortunately things are fully booked for 2011 but just the joy of watching should be enough to make the trip worthwhile and there’s always 2012 – what could be finer than being crowned “King of the Cobbles” in an Olympic Year?