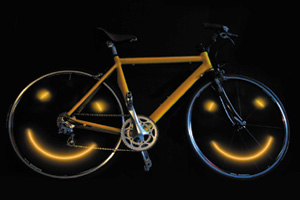 Lights. Seems simple, doesn’t it? You put lights on your bike for two main reasons: to see and be seen. And, as most cyclists know (or at least should know) they are a legal requirement in the UK in both poor visibility and, naturally, at night. But what exactly is the legislation? And how do you know, when buying new cycling lights, what does and does not conform to those legal requirements.

An obvious first stop could be checking your highway code; however that rather vaguely states: “At night your cycle MUST have white front and red rear lights lit. It MUST also be fitted with a red rear reflector (and amber pedal reflectors, if manufactured after 1/10/85).” However the 1989 Road Vehicles Lighting Regulations (RVLR) – and its numerous amendments – is a little more stringent, stating that reflectors must conform to BS 6102/2 or an equivalent European standard, whilst white front lights (in steady, non-flashing mode) must conform to BS 6102/3 or an equivalent European standard. If you’re looking at flashing lights things become even more complex as, again according to the RVLR it must be capable of flashing at a constant rate of 60-240 flashes per minute and have an intensity of “at least 4 candela.” Got all that? Exactly! Incredibly if you want to actually find out what a BS (British Standard) stipulates, you’ll have to pay the BSI Group for the privilege…

So how do retailers tackle getting the right message across to their consumers? Not that well in many cases.

Take Argos for example. Not the most sophisticated of suppliers for cycling kit perhaps, but an undeniable first stop for my new cyclists looking to get basic equipment at a good price. In catalogue you will find the following advice: “It is a legal requirement to use bike lights when riding your bike at night.” No mention, you will notice of also needing lights in poor visibility – which, granted, only applies if lights are already fitted when the weather deteriorates. Further the info panel rather vaguely concludes: “You must show a white light to the front and red light to the rear” – here there is no mention of those lights being either constant or flashing and, if flashing, at what rate. To confuse matters further their website suggests: “LED cycle lights should only be used for extra visibility in conjunction with a BS approved cycle light. Do not use in flashing mode when attached to your cycle, as this is in contravention of the Road Vehicle and Lighting Regulations.” Not only is this misleading but you will also see that they make mention of a BS standard without note either what that standard is or which of their lights do or do not meet it.

Do you think that Halfords, one of the UK’s biggest sellers of bikes and accessories is any clearer? Well the website does include some basic advice, but the sentence “it’s actually the law to use bike lights. Legally you must have lights on your bike as soon as daylight starts to fade” is as similarly vague as Argos and when you dig down in to content, here as an example for the Cat Eye EL130 & LD130 set, you find the user question “Do these lights conform to BS standards in constant mode?” – which elicited two responses, the first (from a customer) an emphatic “Yes”, the second from the Halfords Team “No Unfortunately not.”. The Halfords response goes on to recommend either the HL560BS or LD260BS, neither of which Cyclo could find listed on the site.

But perhaps we are being too harsh or expecting too much. Cyclo spoke to the CTC (the UK’s National Cyclists’ Organisation) and as they pointed out “The long and short of it is that lighting regulations have lagged behind lighting technology.” Alex Bailey, the CTC Communications Officer continues: “In practice, even entry level lights made by an established cycle lighting manufacturer are far brighter than their historic counterparts, LED technology representing a step change for the industry with its massive efficiency improvements over the tungsten lighting that the BS regulations were written for.”

Here, then, are Cyclo’s top tips:

Expensive lights don’t always mean the best, safest or most legally compliant lights – as the wiggle.co.uk site rather helpfully points out: “Strangely some of the very best lights are not legal on their own and should be used with an additional legal backup light.”

If you really want to know if a cycle light conforms to UK legal standards ask the retailer direct – if they won’t, or can’t, tell you shop elsewhere.

Ask around – check online for reviews and questions that have been posted in forums; often the best and most impartial advice will come from your fellow cyclists.

Light up like a Christmas Tree. No one that we are aware of has ever had an accident by having too many lights on their bike. Add additional flashers and reflectives to everything from posts to helmets.

If you don’t have lights permanently fitted to your bike, consider carrying a small set of flashers such as those made by Knog (read the Cyclo review here) If the weather closes in, you’ll be ready.

Add a greater degree of safety with a high-viz jacket. Your body is the biggest reflector you can have on your bike.

Check out the full details of lighting regulations supplied by the CTC at: www.ctc.org.uk

Photo courtesy of Moritz Waldemeyer. For more information on the “Joy Rider”, an exercise in pure minimalism that mounts two LEDs on spokes to paint a smiling face, and his other extraordinary light projects visit www.waldemeyer.com

Following publication of this feature Chris Juden, the CTC’s Senior Technical Officer, asked us to run his response to some of the points raised, you can read that feature here.

One reply on “Let There Be Lighting”

[…] feature on the often confusing legal situation regarding cycle lighting (read the original article here). In it Alex Bailey, Communications Officer for the CTC – the UK’s National Cyclists’ […]