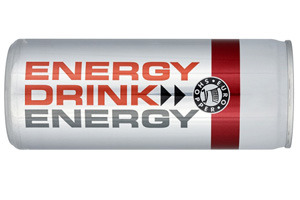 An energy drink from Euro Shopper? What next? Lidl sports gels? Netto hydration tablets? Regardless, the budget brand has introduced their own energy drink to an already pretty crowded market, but at the very least they have had the good sense to give it the no-confusion name of ‘Energy Drink’. And if there is one thing that Cyclo loves more than a good long Sunday sportive, it’s saving a few pence in the process which makes this, at a mere 35p per 250ml can, a tempting proposition. How does the Euro Shopper Energy Drink shape up?

Of course price isn’t everything can a drink costing less than a third of the market leader’s be any good? Euro Shopper are obviously convinced they can take on the big boys here, even employing the rather cheeky tag line ‘All the taste, none of the bull’, and on taste alone it does measure up well. Like-for-like the sugar levels are close to that of Red Bull – 28.25g for Euro Shopper compared to 27.5g for RB, and this is offset by the caffeine bitter kick, 77.5mg against 79.5g for the equivalent size of RB. Rather shamefully though Energy Drink doesn’t list its sodium content. So taste is reasonable and, after all, who glugs an energy drink for taste alone?

Certainly it lacks the ‘cool’ of Red Bull and you’re unlikely to see either the Euro Shopper X-Fighters or Flugtag any time soon, but this is certainly a good budget option for these lean times.