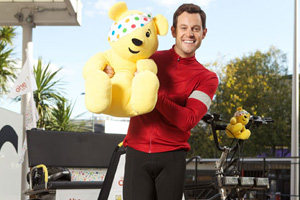 The One Show’s Matt Baker will be taking to three wheels this year to raise money for the annual Children in Need campaign; attempting to ride a rickshaw from Edinburgh to London over 8 days whilst picking up a series of ‘surprise’ guests along the way. The challenge is being overseen by adventure travel specialists Across the Divide (www.acrossthedivide.com) whose itinerates include the Euro Cities Cycle and the classic London to Paris.

Baker will embark on his arduous journey on the morning of Friday November 11from Edinburgh Castle Esplanade and will attempt to complete the 484 mile journey to the BBC Centre in London, finishing live on The One Show’s Children in Need special on Friday November 18. His route will comprise: Day 1 Edinburgh to Hawick (53.5miles), Day 2 Hawick to Hexham (59.2miles), Day 3 Hexham to Barnard Castle (49miles), Day 4 Barnard Castle to York (70.6miles), Day 5 York to Lincoln (78miles), Day 6 Lincoln to Peterborough (73.2miles), Day 7 Peterborough to Cambridge (41miles) and Day 8 Cambridge to London (59.3miles). As if all the miles weren’t enough it’s also estimated that he will climb almost the equivalent height of Mount Everest during the ride.

Further details and for ways of donating visit www.bbc.co.uk/pudsey