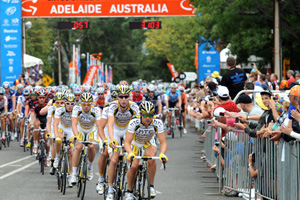 With German sprinter Andre Greipel now confirmed for the Team Lotto Belisol Tour Down Under squad it’s clear he will be heading out with the intention of making it three times lucky, having taken then win in both 2008 and 2010 editions ¢ the only other rider ever having won twice being Australian favouriteĀ Stuart O’Grady (1999 and 2001). The WorldTour opener ¢ which takes place in and around Adelaide January 15 to 22 ¢ always attracts the cream of riders hoping to make an early season impression and Race Director Mike Turtur confirmed Greipel’s involvement, saying, ‘We know Greipel is a formidable sprinter and our race suits him well, so it will be interesting to see if he can be the first rider to win three editions of the Santos Tour Down Under.’

Marc Sergeant, Team Director of the newly-named Team Lotto Belisol, added, ‘The Lotto Belisol squad will be built around our top sprinter Andrķ Greipel. Also Andrķ has a very warm relationship with the Australians and their Santos Tour Down Under. With Adam Hansen and Greg Henderson in the lineup, we have a local Australian and New Zealand rider, each with a specific role to support the team.’