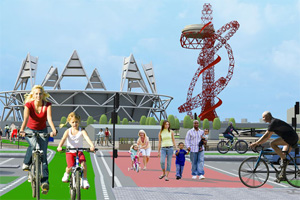 In response to what they claim are ‘deep worries’ suffered by both existing and potential cyclists over the safety of the capital’s roads the London Cycling Campaign (LCC) has launched their ‘Love London, Go Dutch’ campaign and petition. Designed to encourage the next mayoral candidate to adopt the same kind of cycle- and people-friendly streets that Holland boasts, the scheme is sponsored by Brompton Bicycles and waste management and recycling outfit Bywaters, and supported by the Dutch Embassy. Amongst those who have already pledged their support are cultural writer Alain De Botton (author of ‘The Art of Travel) who comments: ‘This brilliant campaign recognises that so many more of us would cycle if only the roads were safer. It aims to resolve the current situation where many of us want to cycle all the time, but are scared of the dangers. Societies that cycle are healthier, but also, the bicycle is an emblem of a democratic, engaged citizenry.’

LCC has also produced a series of design proposals that follow the key concepts of Love London, Go Dutch for three key London hot-spots: Parliament Square, the Olympic Park and Blackfriars. To see concept artwork, for further details and to sign up to the e-petition visit www.lcc.org.uk