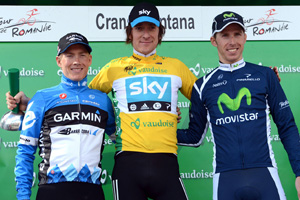 Despite mech issues that saw him briefly dropping his chain at the beginning of the climb at Crans-Montana on the final leg of the Tour de Romandie, Team Sky’s Bradley Wiggins unleashed a spectacular ride to win not just the stage but to claim overall victory. Wiggins, who celebrated his 32nd birthday on Saturday, admitted that a new maturity was probably in play when he was briefly forced to dismount and re-chain, saying: ‘I’m pleased with the way I handled that moment because a few years ago I might have thrown my toys out of the pram and chucked my bike down the ravine!’ Final overall standings saw Wiggins on 18:05.40 with Team Garmin’s Andrew Talansky second on the podium with 18:05.52 and Movistar’s Rui Costa with 18:06.16.

Naturally the overall victory was part of the team play, something that Wiggins was quick to acknowledge after a gruelling few days that had seen strong support from the start: ‘It’s really nice to finish it off in a time trial on the last day for the boys. All week they’ve been incredible – it doesn’t matter how strong you are as an individual, without those team-mates this week I wouldn’t be in this position… What a team we’ve had here this week; you know you’re in a great team when you’ve got the world champion riding for you on the front.’