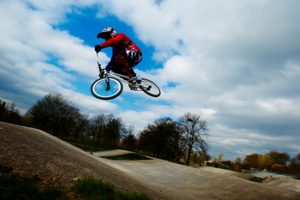 The BMX World Championships that took place over the weekend saw some spectacular spills and potentially devastating developments for Team GB Olympic hopefuls. Three-time World Champion Shanaze Reade, having bagged Silver in the Time Trial at the National Indoor Arena on Friday (May 25), took an impressive tumble on Sunday – just a week after she was hospitalised with concussion following a crash at the Manchester BMX track – ending her hopes of a fourth title. Grant White, GB’s BMX Team Manager said, ‘Shanaze was in the lead. She was going quick and just pushed that little bit too much. You can’t ride reserved in our sport, it’s just the way it is…’

Coming off far worse was Liam Phillips, who had similarly won silver (in the Men’s Time Trial), whilst Reade was battered and bruised – both physically and emotionally – Phillips, from Burnham-on-Sea in Somerset, was catapulted over his handlebars and stretchered off with a suspect collarbone fracture. He tweeted, presumably with his good arm, ‘So grateful to have an incredible support network around me. On my way to the Bridgewater Hospital to see the surgeon.’ Why so much carnage in the sport? Over to Grant White again: ‘You can sum it up in three letters: B-M-X.’

Get the latest on Phillip’s condition at: www.liamphillips65.com