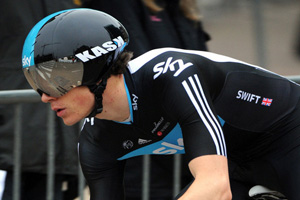 Team Sky’s Ben Swift has been forced to withdraw from the 95th edition of the Giro d’Italia, which starts tomorrow (May 5), after sustaining a fractured right shoulder whilst on a training ride. Swift, who has devoted much of the season start to track cycling, winning a world title in the scratch race and two further silver medals in the recent World Championships, will now concentrate on making a full recovery before committing to further competition. He will be replaced on the Giro by 38-year-old Brit Jeremy Hunt, an exceptionally experienced rider now in his 16th season as a pro who joined Team Sky after spending the 2009-10 season on the Cervélo Test Team; he has already ridden in all three of cycling’s Grand Tours and looks to make a strong contribution over the eight Giro stages.