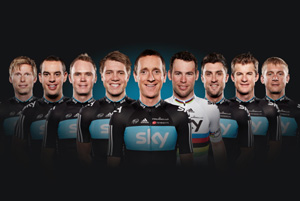 Team Sky have confirmed their line-up for the Tour de France, which begins on June 30. With consecutive victories at Paris-Nice, Tour of Romandie and Critérium du Dauphiné Bradley Wiggins will lead the team consisting of Edvald Boasson Hagen, Mark Cavendish, Bernhard Eisel, Chris Froome, Christian Knees, Richie Porte, Michael Rogers and Kanstantsin Siutsou. The 99th edition of the TdF marks Wiggins’ sixth appearance at the event and with both Andy Schleck and Alberto Contador out of contention (due to injury and being a drugs cheat respectively) hopes are high for an overall win. In a statement accompanying the squad announcement Wiggins said, ‘I’ve been waiting for this moment for a long time and I’ll do everything I can to win the Tour de France. Hopefully we can do the business for ourselves and our fans, and become the most successful British-based cycling team ever.’

World Road Race Champion Mark Cavendish makes his debut for Sky at the Tour, commenting on his squad inclusion, ‘It’s a dream to ride for a team that holds so much British interest and has a chance to win the yellow jersey.’

Dave Brailsford, Sky’s Team Principle, described the selection process as ‘a very tough challenge’, adding: ‘…we are blessed with a great depth of talent in our squad. We believe we have picked a strong and balanced team though, and one which can cater for any eventuality… Our priority this year is the General Classification with Bradley but that doesn’t mean we’ll neglect the sprint stages, or Mark’s bid for green jersey.’