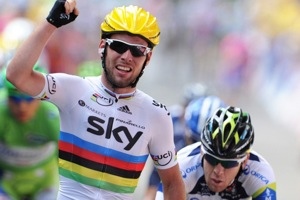 Mark Cavendish took his first (of many?) wins as a Team Sky rider at the Tour de France today (Monday, July 2), delivering a quite brilliant display to win Stage Two in a time of 4h56’59”. In the first sprint finish of the Tour, Cav had positioned himself superbly in order to go head to head in the final 200 yards and force Lotto-Belisol’s Andre Greipel into second and Orica-GreenEDGE’s Matthew Goss into third. The victory marked his 21st stage victory at the TdF, putting him sixth on the all-time list behind the legendary Eddy Merckx and just a single stage behind Lance Armstrong.

Speaking after the stage, Cavendish commented, ‘I’ve been on the back foot but I’ve been more relaxed than ever coming into this Tour de France as the pressure hasn’t been there for me to do anything. (A win) doesn’t give me any more confidence as it’s never easy to win a Tour de France stage, with a team or on your own… It wasn’t as windy as I thought it was going to be and that didn’t play as much of a factor. It’s been a good start to the race for the team. Brad stayed out of trouble and hopefully he can continue on towards yellow. We’re here to win the yellow jersey. I’m here to do what I did today.’