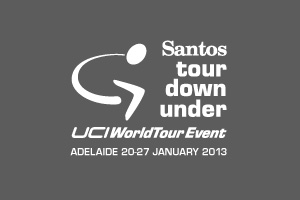 We may only be a day or two into the 2012 TdF, but we’re already looking forward to 2013 events with the release of details for the Santos Tour Down Under, which takes place in and around Adelaide and regional South Australia between January 20 and 27. A new stage route and interesting sounding (!) grass start are just two of the components that will make up next year’s UCI Tour opener along with a number of new towns and suburbs seeing their share of the action.  News that the Stage Two Mount Barker to Rostrevor leg will, at just 116km, be the shortest in the event’s history might seem an underwhelming revelation, but the fact that it will include the new ŠKODA King of the Mountain climb on the gruelling Corkscrew Road goes a long way to redressing that balance.

As the largest cycling race in the southern hemisphere (and the first major event on the year’s calendar) the Santos Tour Down Under not only attracts the cream of international cyclists but also serves as an excellent showcase for the regions varied attractions; as Minister for Tourism Gail Gago comments, ‘The Santos Tour Down Under sees an influx of visitors into the state and encourages locals to get out into their own backyard… It’s a fantastic opportunity to showcase Adelaide and the fabulous regions of South Australia.’