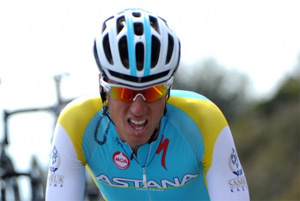 Radioshack Nissan Trek are looking to strengthen an already impressive (and international) line-up with the news that Croatian rider Robert Kiserlovski has signed to the team on a two year contract. Born in Rijeka, the 26-year-old has already enjoyed a productive 2012 season with a fifth place in the Flčche Wallonne and top-ten overall positions in both Paris-Nice and the Volta Ciclista a Catalunya. He was less successful (downright unlucky in fact) at this year’s Tour de France when he came of by far the worst in the notorious nail and tack sabotage on Stage 14, which left 30 riders with punctures but Kiserlovski with a fractured collarbone and no choice but to retire.

Radioshack Nissan Trek’s general manager Johan Bruyneel commented on the signing, ‘Robert is a rider with an attacking mind. We’ve been following him for some time now. He rode a nice Ardennes week, even though he was a novice in that kind of work… (he) is a strong addition to our roster and he will have a free role in certain races. He’s a rider that is capable of a lot on a good day, even though he didn’t get full recognition of that yet. His results and development are promising and he has the right attitude.’

Kiserlovski, who admits a love of the Ardennes Classics but a true passion for the Giro d’Italia, added, ‘I hope I will be able to race the Giro. Most riders prefer the Tour, but the Giro is my dream race… I’m very proud to be joining this team. I really like the international look and feel of it and it will be good to race with so many people from different nationalities. This is a good opportunity for me – really the next step in my career.’