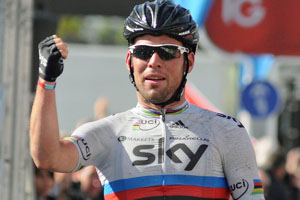 The Tour of Britain keeps on getting better for Team Sky’s Mark Cavendish; capitalising on yesterday’s win he took top spot again today on Stage 4 (156km, Carlisle to Blackpool) in a time of 3:51:33, holding off Garmin’s Steele Von Hoff to second and GreenEDGE’s Leigh Howard for third. The victory on this wet and wild stage now means he leads the General Classification with a total time of 17:07:51, knocking Howard back to second. Stage 4 proved to be a near-identical event to Stage 3 with Team Sky dominating and setting Cav up for the perfect sprint finish.

With the route often a stone’s throw from Bradley Wiggins home turf, Cavendish confirmed afterwards it had proven an advantage, commenting: ‘Bradley lives not far from Blackpool and the route included a lot of the roads he uses for training. He told us it was very open, and very windy, and he knew the exact place we should go on the attack. It was the perfect call.’