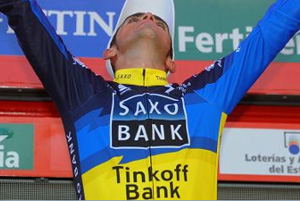 In taking top spot at the Vuelta a Espańa today in a total time of 84:59:49 Alberto Contador has won his first Grand Tour since serving his largely back-dated ban for doping offences, which saw him stripped of both his 2010 Tour de France and 2011 Giro d’Italia titles. In actual fact the Saxo Bank star had more or less won the Vuelta by the end of yesterday’s penultimate stage (170.7km to Bola del Mundo) and only injury or catastrophic mech failure could have prevented victory in his home city of Madrid today. Never afraid of displaying a little arrogance Contador was happy to trumpet the win a day ahead of schedule, saying, ‘Maybe I’ve won the race through bravery, refusing to conform and because of the way I approach racing, too.’ Fellow Spaniards Alejandro Valverde (Movistar) took second on + 1:16 and Joaquin Rodriguez (Katusha Team) third on + 1:37; GB’s Chris Froome finished the 21-stage race off the podium in fourth place despite a hard fought battle throughout.