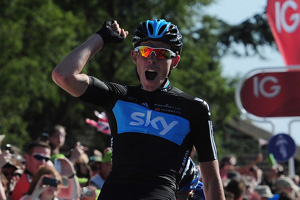 A fine start yesterday for Team Sky at the Tour of Britain, although possibly not the kind Mark Cavendish would have hoped for. The opening stage – 203km for Ipswich to Norfolk Showgrounds – was won by Sky’s Luke Rowe in a time of 4:51.05 but not before the biggest upset of the day that saw Cavendish and a host of other riders wiped from the field in a mass pile up less than one km from the finish. With Team Sky having worked hard through the day to set Cav up for his trademark sprint finish, it was relative novice Rowe who took the initiative and picked up the pace and the race, out-sprinting UnitedHealthcare’s Boy Van Poppel who he held off into third. Endura Racing’s Russell Downing took the third spot.

Speaking post-race Rowe said, ‘It was great to take the win today… obviously it was meant for Cav. We had the lead-out and it would have been perfect. I felt good and strong but it’s unfortunate for Cav. That’s our sport. It shows how unpredictable it is and anything can happen.’ Team Sky Sports Director, Servais Knaven, added: ‘Cav is okay. He has a few cuts and bruises but he will be okay. He has shown that he is going well and he was in a good position when the crash happened… a bit of mixed emotions but we are glad that Cav is okay. It’s great for Luke and for the team that we were able to win the stage.’

The ToB continues today with the 180.7km leg from Nottingham to Knowsley Safari Park.