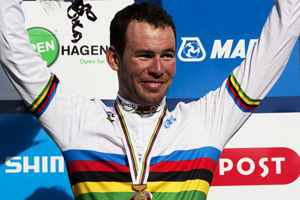 Less than two weeks after Tour de France winner Bradley Wiggins and Shane Sutton, Head Coach at Team Sky, were both involved in separate accidents on the road, Britain’s Mark Cavendish has also had an altercation with a car. Cavendish, who recently left Sky for Omega Pharma-Quickstep, was training in Italy when a car ahead of the 2011 Road Race Champion hit the brakes without warning. Escaping relatively unscathed, Cavendish tweeted, ‘Went & hit the back of a car that slammed on today in training. Wasn’t ideal. Apart from a bruised arm, I’m relatively ok. If anyone cares.’

For his part Wiggins was released from hospital after one night with a broken index finger and fractured ribs, whilst Sutton suffered more serious injuries and continues to recover from bleeding on the brain caused when knocked from his bike on the A6 near Levenshulme in Manchester.