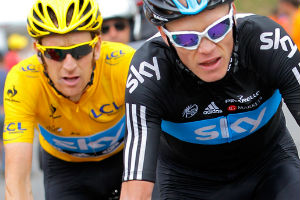 After much speculation as to how Team Sky will play the big races of 2013 we seem to be a step closer to knowing with Sky boss Dave Brailsford commenting, ‘It does look as though the plan going into next year… is that the Tour of Italy would be a very good target for Bradley and leave Froomey then to focus on the Tour de France.’ Brailsford, speaking to reporters at UK Sport’s World Class Performance conference in Leeds, said: ‘We are just getting back into training now and need to do quite a lot of planning.’

Chirs Froome of course looked strong (arguably in contention for an overall win despite team instructions) at this year’s TdF and the idea of unleashing him unfettered on the 2013 Tour as every bit as exciting as the prospect of Wiggins adding a Giro title to his impressive roster. The Giro takes place May 4 – 26, whilst the TdF (the 100th edition, with a course likely to favour climbers like Froome) runs June 29 – July 21.