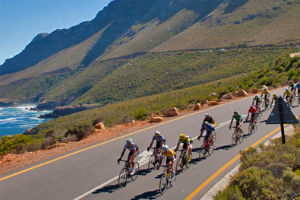 When HotChillee, the cycling events company behind the classic London-Paris and Alpine Challenge rides, announced the launch of their South African odyssey Cape Rouleur 2013, it was no surprise that places were so quickly snapped up. Comprised of a three days riding (two at 128km, plus 208km) that take participants through the stunning South African scenery in the Western Cape, over mountain passes such as Franschhoek, Viljeon’s and Houw Hoek, and through the Perdeberg National Reserve, there is in excess of 5000m of climbing to tackle and even then the hard work (and fun) isn’t over… A fourth day of ‘slightly more relaxed’ riding follows which includes a stop at Nitida Wine Farm before an escorted leg into central Cape Town as a ‘festive’ peloton of 150 riders by the Cape Town motor cycle police. Finally, signing up to the Cape Rouleur also includes seeded entry into the Cape Argus Pick n Pay Cycle Tour, the world’s largest individually timed cycle race.

Why are we teasing you with all this when the event is already full? Two reasons – firstly it looks so spectacular that you’ll want to make a note of it for 2014, but also because the good people at HotChillee tell us that they have opened a reserve list for this year’s event. If you don’t ask, you don’t get. Full itinerary details and reserve list requests can be found at caperouleur.com