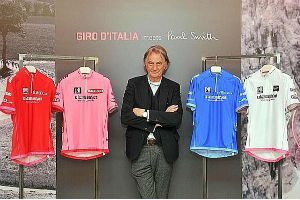 British designer Sir Paul Smith has revealed the range of jerseys – including one for the fabled leader’s ‘maglia rosa’ – that he has created for the 2013 Giro d’Italia. The jerseys, which will be made by Italian firm Santini, were unveiled at Smith’s showroom in Milan at an event hosted by event organisers RCS Sport. In addition to them featuring Smith’s (literally) trademark signature the maglia rosa itself sports a hidden feature: an inside collar dedication to Fiorenzo Magni, three-times winner of the Giro (1948, 51 and 55) who died last month at the age of 91. The cycling museum that sits on the Tour of Lombardy route, co-founded and overseen for many years by Magni, has to date collected more than 50 variations of the maglia rosa, fitting then that the hidden tribute in Smith’s design will eventually find its way there too.

This year Giro runs 3,405.3km from May 4 to 26. For further information on Paul Smith see: paulsmith.co.uk