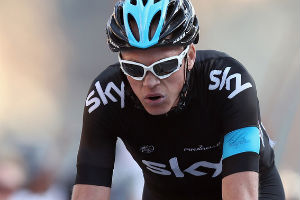 Chris Froome, superbly set up by his Team Sky teammates, has scored a second place on today’s Stage 4 of the Tour of Oman – the 152.5km mountainous route from Al Satiyah to Jabal Al Akhdar – to take the overall lead. With two days of action left, Froome took the second position 4seconds adrift of winner Joaquim Rodriguez (Katusha, in a time of 3h 35’ 00”) after an epic battle on the Tour’s trademark climb on the Green Mountain summit finish, which saw BMC Racing’s Cadel Evans finish in third. Froome, now on a total time of 16hr 35’ 05”, sits reasonably comfortably 24seconds ahead of Evans in second overall and 25seconds over Alberto Contador (Saxo-Tinkoff) in third; the Spaniard later tweeted ‘Already back to the hotel from stage 4. Today uphill finish, sensations were not the best, but I’m improving.’

Today’s stage – known as the ‘Queen Stage’ – was crucial to Froome staying in contention having started it in 13th overall place after two consecutive days or victory from Cannondale Pro Cycling’s Peter Sagan left the Sky rider some 36seconds behind. If Froome, who has previously taken second place at both the Tour de France and Vuelta a Espana, can maintain his composure over the next two days he could take the first major stage race of his career.