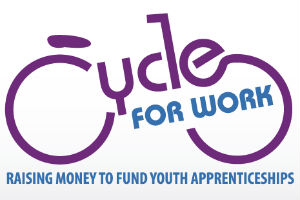 A group of business people from Calderdale, West Yorkshire, are getting on their bikes and cycling from Land’s End to John O’Groats between April 19 and 28 in a bid to help fund at least 25 youth apprentices. Led by Steve Duncan, Community Foundation for Calderdale (CFFC) CEO, the ‘Cycle for Work’ team will be pedalling through 13 community foundation areas as they make the 940mile journey colloquially known as ‘LEJOG’. As the chosen mayoral charity for 2013, CFFC has set itself the challenge of raising over Ł100,000 to help fund apprenticeship positions for Calderdale youngsters. The Cycle for Work team have adapted the traditional LEJOG route so that it comes through Calderdale on April 23 where the riders will be joined by a cycle cavalcade of hundreds of local people led by the Mayor of Calderdale, John Hardy, riding a tandem.

In a further initiative, recognising that there are many Calderdale households with unwanted bikes or bikes in disrepair, the Community Foundation has declared a ‘bike amnesty’ whereby residents can hand in their old bikes, which will then be repaired and sold on to assist the Cycle for Work project.

For further information about Cycle For Work, to get involved and, obviously, to sponsor this magnificent challenge see cycleforwork.co.uk or the Community Foundation website visit cffc.co.uk