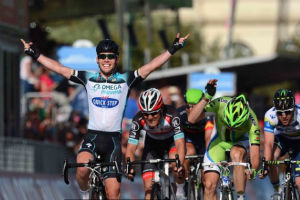 Omega Pharma-Quickstep’s Mark Cavendish has won the opening stage of the Giro d’Italia – the 130km circuit loops of Naples – bagging his 11th career stage win of the Italian classic and his third time in the famed leader’s pink jersey (the Maglia Rosa). Cav launched in typical ‘Manx Missile’ form in the closing two-dozen metres with dramatic effect, completing the opener in a time of 2h58’38”, and keeping Cannondale’s Elia Viviani in second and the French National Champion, Nacer Bouhanni (FDJ), in third.

After inadvertently swearing live on air as he fiddled with his radio earpiece, Cavendish composed himself to thank his teammates and concede that the stage had been both tough and hot – the temperature having hovered around the 30degrees mark. He commented, ‘It was a difficult, difficult stage for me… We didn’t get it quite right at the end and Gert [Steegmans] had a mechanical in the final kilo, which we need to look at. They (mechanical failures) are costing us too many races.’

The opening stage was awash with crashes (and, at one point, a stray dog on the course), with David Millar tweeting, ‘I love crashing the first day of a Grand Tour: glut & shoulder bruised to hell, bike broken ( Congrats @MarkCavendish, delivers as usual.’ Team Sky’s Bradley Wiggins – who is targeting both a Giro and Tour de France win for 2013, and who avoided the many spills – finished respectably in 64th on equal timings.

The Giro d’Italia continues tomorrow with the 17.4km Team Time Trial on the tiny island of Ischia.