The origins or the Tour de France are as arcane and shrouded in legend as they are typically Gallic, and as the 100th edition approaches in an age of apps, blogs and social media it seems almost quaint to consider that it was rivalry within the printed newspaper męlées of the early 20th Century that kick-started the greatest cycling race in the world.

Five years before those trailblazing cyclists set off for the first TdF in 1903, French novelist Émile Zola wrote an open letter to L’Aurore newspaper in defence of one Captain Alfred Dreyfus, a Jewish soldier accused (many felt unjustly) of spying for the Germans. Amongst those who supported both Zola and Dreyfus was Pierre Giffard, the then-editor of France’s first sports newspaper, Le Vélo – unfortunately many of Le Vélo’s backers and advertisers, many of whom were bike manufacturers, took umbrage at such a left-leaning and near-anti-national opinions and jumped ship.

The result was the launch of L’Auto-Vélo (later simply L’Auto), printed on distinctive yellow paper to differentiate it from green-tinged rival Le Vélo. Heading L’Auto-Vélo was Henri Desgrange, an avid cyclist with a host of pedal-powered records to his credit. Desgrange was joined by Victor Goddet, an astute financier, and by Géo Lefčvre, a sports journalist already of some repute. Together they began to forge a true rival to Le Vélo, even wrestling away control of the Paris-Brest-Paris race, which had been founded by poor Giffard, and establishing, in 1902, their own Paris-Bordeaux race.

Despite this, circulation was stagnant – what was needed was a real coup to ignite the French passion…

On Saturday December 20, 1902, Desgrange met with Lefčvre for lunch at the Brasserie du Madrid in Paris. Their meal complete, Lefčvre offered what he hoped would be an idea to save their beloved paper: the staging of a Tour de France. With hasty plans set in place – and with the financial wizardry of Goddet to the fore – it was on January 13, 1903 that the paper ran their tantalising intention to stage a ‘race like nothing before.’

In the 110 years since the first race – which covered a total distance of 2,428km and was won by Maurice Garin – the Tour de France has transformed itself in many ways; evolving and adapting across the span of the 20th Century but retaining the same ideal at its heart: rivalry…

The 100th Edition of the Tour de France begins in Corsica on June 29, finishing some 3,360km later on the Champs-Elysees, Paris on July 21. Full details at letour.com and on Cyclo as the action unfolds. 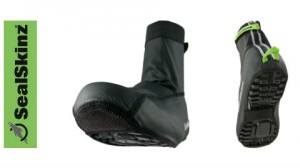 SealSkinz Lightweight Waterproof Overshoes seem like such an obvious idea. Since the 1980s, when the first SealSkinz waterproof sock was invented (in a flash of inspiration whilst watching a documentary about John Logie Baird, so legend has it), the company has been keeping bad weather away from the skin of outdoors type. Now the wait is almost over for cyclists with the SealSkinz Lightweight Waterproof Overshoes due for release in autumn 2013. Cyclo took an early first look in the hope they would live up to our expectations…

Designed predominantly for mountain bike and road/commuting (a specific race overshoe for cleated shoes is also out later this year – read our review here) the SealSkinz Lightweight Waterproof Overshoes offer an exceptional degree of weatherproofing, combined with breathability and comfort. As you would expect from SealSkinz this is a true quality product, absolutely fit for purpose and with the kind of attention to detail on which the brand thrives.

The outer membrane swept away water on our test rides, whilst the inner, flocked, lining did an excellent job of keeping feet warm. The design lines are clean, which, the makers quite rightly claim, reduces wind resistance and means that they get on with doing their job unobtrusively while you get on with the ride. 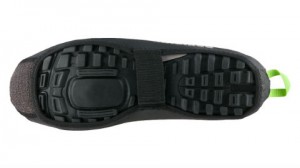 The fit is snug but not restrictive (available in sizes S, M, L and XL) with final adjustments made via a Velcro strap across the upper zip, which features a raised, rubberised, branding flash and an inner waterproof flap to ensure nothing creeps in through the fastenings.

The inch-wide underfoot Velcro strap did its job equally well and, whilst we had initial misgivings about its bulk, it remained perfectly in place without any discomfort. The neon-green pull-on loop is a nicety we admired, it meant that tugging the overshoe on (or indeed off) was achievable without getting hands unduly muddy/oily or risking stretching or misshaping, and for extra safety the zip edges are lined with reflective strips.

Having already put the SealSkinz Waterproof Overshoes for cleats through their paces, we had expected these lightweight, road versions to deliver – and so they did. Their tough construction – which includes a Kevlar toe piece for added durability – should see these through many seasons and the extra niceties make them worth every pound of their Ł35 RRP.