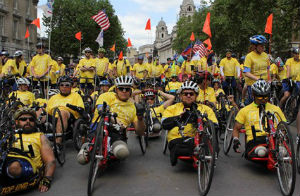 Yesterday (June 2) saw the conclusion of Help for Heroes’ latest fundraising challenge with over 1,300 cyclists, led by over 150 wounded Servicemen and veterans, reaching Horse Guards Parade in London. The Hero Ride concluded a week of two-wheeled fundraising for the charity and began with a mass start in South London’s Blackheath where cyclists were joined by some 300 riders who had set off last Tuesday from Paris as part of their own 350mile effort.

Help for Heroes Patron, Mark Cavendish, was in London to support the riders as they crossed the finish line. Speaking ahead of the event he said, ‘I definitely know about how much training and dedication has to go in to a cycling event like Hero Ride – you have to be dedicated and all of the cyclists taking part on Sunday have a great cause in Help for Heroes that they’re fighting for… The fantastic part of Hero Ride is that before the big event that the public get the chance to see in central London, each rider has completed their own personal challenge. Some cyclists are coming in from Paris, some straight from Wiltshire at the crack of dawn and that is a real achievement.’

For further details and to find out more about the Help For Heroes charity, see helpforheroes.org.uk