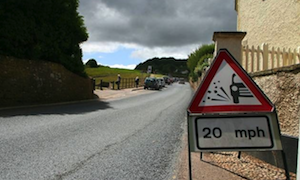 It’s about this time of year that local councils roll out their road surfacing teams to ruin that beautifully smooth route you’ve been pounding since spring. There’s nothing worse than finding a favorite stretch destroyed with those big loose chippings. But what is that stuff?

According to our local council, and investigations by Cycling Weekly, the process is called ‘Surface Dressing’ and those chips being launched at you by a speeding car are granite – ouch. Surface dressed roads not only present a flying chip hazard to bike and rider but see a dramatic increase in road resistance making your journey that much harder, and increases the likelihood of punctures.

So why do they do it? Simple answer is that it’s cheap and as austerity bites you’re likely to see a lot more of it.

The process involves spraying the road with bitumen, tipping on granite chippings and, if they are doing it properly, rolling the lot until it’s bedded in. What often happens is the teams leave the rolling to passing cars and time. In theory the excess chips should be brushed away on a regular basis but that rarely happens. It’s easier just to stick a ‘go slow’ sign on the curb. Councils admit there are safety issues for cyclists but maintain the method is a ‘cost effective way of sealing up the network’, increases safety due to better grip (for cars) and prolongs the lifetime of the road surface. Whatever the truth expect to see a lot more during summers to come. Let Cyclo know how it’s affecting you.