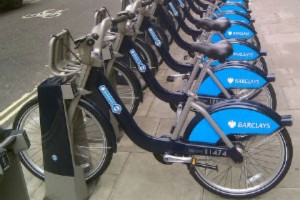 A female cyclist, believed to be 17-year-old, has been hit and killed by a lorry on Barclays Cycle Superhighway 2 – which currently runs from Bow to Aldgate – tragically making her the first cyclist killed whilst riding a ‘Boris Bike’. The London Ambulance Service was called to the incident at around 6.30pm yesterday (Friday, July 6) and the woman was taken to hospital, but pronounced dead on arrival. The driver of the lorry has not been arrested and the Metropolitan Police say investigations into the exact circumstances are ongoing.

Leon Daniels, Managing Director of Surface Transport for Transport for London told the BBC: ‘Our thoughts go out to the friends and family of the female cyclist who tragically died following a collision with a heavy goods vehicle on Whitechapel High Street. We understand she was riding a Barclays Cycle Hire bike… Transport for London has a range of measures already underway to further reduce the number of collisions involving cyclists across London and we will be assisting the Metropolitan Police with their investigation into this tragic incident.

The cycleing ‘super highways’ are just paint in the road, and don’t actually mean anything – why are buses and lorries even allowed in them?

Lorry? Why is it always a Lorry in London – sad and angry