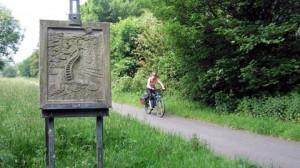 Prime Minister David Cameron has announced that he wants to start ‘a cycling revolution’ building on the success of the Olympics, Paralympics and two consecutive Tour de France wins. Ł94m in cycling funding will benefit a number of English cities including Leeds and Bristol and four of our national parks – the Peak District, the South Downs, Dartmoor and the New Forest.

In addition to a commitment to cutting red tape the cities funding (which will total Ł77m) will be used to both improve existing cycle schemes and fund new routes. By way of example Manchester, the biggest recipient of Department for Transport funding (Ł20m supplement by Ł11.1m local contributions) will gain some 56km of new or improved city-wide cycle routes, whilst at the other end of the scale Oxford will see improvements to a single roundabout system funded to the tune of Ł0.8m TdF money and Ł0.6m local authority cash. The eight cities receiving DtF funding are: Manchester, Leeds, Birmingham, Newcastle, Bristol, Cambridge, Oxford and Norwich.

However not everyone has applauded Cameron’s intentions with the charge being led by shadow transport secretary Maria Eagle MP who told the BBC that: ‘No amount of cynical spin from David Cameron will make up for the fact that, immediately on taking office, he axed Cycle England, the Cycle Demonstration Towns scheme and the annual Ł60m budget to support cycling that he inherited.’ Eagle also points out: ‘Only last month the prime minister set out plans for Britain’s roads that failed to include a single commitment to the investment in separated cycling infrastructure that is the best way to boost cycling and make it

For an interesting take on the announcement see Peter Walker’s excellent Bike Blog from The Guardian here and to read Cyclo’s Interview with Maria Eagle MP click here.