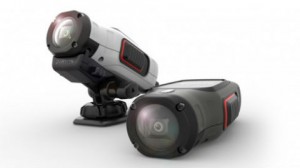 GPS market-leaders Garmin have stepped into the action camera arena with the announcement of the Garmin VIRB, a full HD model capable of recording three hours of 1080p video on a single charge, in part thanks to an ambient light screen far less power-hungry than traditional backlights. Featuring the latest image stabilization tech, the ability to switch to 16 megapixel stills mode, waterproofing (up to 30minutes at 1m) and distortion correction that can remove, or at least reduce, the fish-eye aesthetic that defines most action camera footage.

The Garmin VIRB is expected to launch in the US later next month and reach the UK in early/mid October; it will be available either as standard version or the WiFi-enabled Garmin VIRB Elite that adds GPS, accelerometer and altimeter functionality in addition to connectivity to free iPhone and Android apps. The price point has been set at Ł269.99 for the VIRB and Ł349.99 for the VIRB Elite putting them firmly in the territory of the top-selling GoPro HERO3 and HERO3 Black.