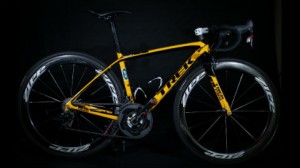 Trek Bicycle has announced that it is to extend its partnership through 2014 with Team MTN-Qhubeka, the first Professional Continental UCI team in Africa, who have enjoyed success at the highest level with Trek during 2013, including Gerald Ciolek’s victory at Milan-San Remo.  During the season, the team has used the Trek Madone Seven Series for the majority of action, whilst the Trek Domane was employed for the cobbled classics and the Trek Speed Concept during time trials.

Commenting on the extension of support of MTN-Qhubeka Trek VP Joe Vadeboncoeur said, ‘This partnership is bigger than cycling, and Trek is excited to be part of changing the face of racing… We believe that the bicycle is an agent of change in places like Africa, and MTN-Qhubeka is an agent of change in the world of bike racing. We are committed to the relationship and helping them continue moving towards the next level.’

MTN-Qhubeka Team Principal, Douglas Ryder, added: ‘We are really excited to extend with Trek for next year. The support and commitment to our Pro Conti team and feeder team from the Trek Race Shop is incredible and as an organization they are on the leading edge of the technology curve, which excites and motivates our athletes knowing that they are racing with the best equipment.’

Team MTN-Qhubeka p/b Samsung race to raise awareness for Qhubeka, an organisation working to mobilise people in Africa on bicycles. This work to earn model allows people to earn bicycles through various programmes like growing trees, recycling waste and increasing school attendance. For further information on their work the team see qhubeka.org