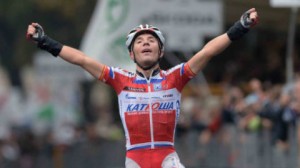 Having been beaten by no more than a bike’s length at last Sunday’s World Championship Road Race, Katusha’s Joaquim Rodriguez is now in more celebratory mood having won the Tour of Lombardy for the second year running. The Spanish rider was away (if not quite home) with 10km still to go on the 242km one-day classic – known colloquially as ‘Race of the Falling Leaves’ – finishing in 6hrs 10’18” with fellow countryman Alejandro Valverde (Movistar) taking second (+17) and Saxo-Tinkoff’s Rafal Majka third on +23”.

Thanks to the victory, Rodriguez has now passed Chris Froome as the leader of the UCI World Tour Individual Ranking with 607 points against the Sky rider’s 587 points; only the Tour of Beijing remains for the WorldTour 2013.

Commenting on his victory Rodriguez said, ‘Honestly I think this was a spectacular victory… I felt in a great shape, so I attacked in the same place where I attacked last year: I was the favourite rider, I think everybody knew that was my strategy and waited for my action, but anyways nobody could follow me so this incredible solo victory makes me really proud, also because now I’m first in the UCI World Tour Individual Ranking, a special classification I really care about.‘