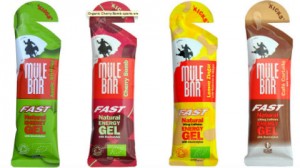 Sometimes itís the little things in life that matter, the detail that amplifies the underlying excellence Ė like the dab of rouge on the womanís cheek in Seuratís La Grande Jatte. Okay perhaps weíre waxing a little too lyrical for a gel review, but MuleBar Kick Gels are ridiculous easy to openÖ

Opening a gel one-handed on a bike can be precarious at best, but the angled rip top on MuleBar Kick Gels is a breeze and (generally) the tab stays attached so thereís no quandary about stashing two bits of litter and no eco-embarrassment from the top taking flight behind you. On a further environmental note the Kick Gels are registered organic, have no synthetic ingredients, artificial preservatives, colourings or flavourings and are suitable for vegans and vegetarians. Although the wrappers are not compostable like many of MuleBarís energy bars, we suspect theyíre working on that too.

All this would count for nothing if the gels didnít perform in the energy department, but they stack up here too. Values differ very slightly between flavours Ė Apple Strudlel, Lemon Zinger, Cafť Cortado and, our favourite, Cherry Bomb Ė but generally you can expect around 110kcal with 27g of carbs (25g of which from sugars) from a 37g sachet. Carbohydrate sources again vary in their specifics between varieties but are a mix of fast and slower release sugars from fruit sources and high GI brown rice syrup (which can also be easier on the stomach than fruit derived sugars.)

Flavours are excellent with the Lemon Zinger and Cherry Bomb both delivering a welcome tang to cut through the sweetness, whilst the Cafť Cortado, as the name implies, adds 100mg caffeine Ė a little more than you would get from an 80ml espresso or two regular 330ml cans of Coke (should you really not care about your health.) The Cafť Cortado also throws in natural guarana extract which, combined with the caffeine, delivers a noticeable kick. To partially counter body-salt loss from sweating all four varieties of MuleBar Kick Gels include 100mg of sodium derived from Himalayan crystal salts, and although we applaud adding something that sounds like itís been collected by Lara Croft, it would arguably have been good to have included some potassium too. Sweat rate and sweat composition vary massively from person to person but with anything between 400 and 1800mg lost per litre of sweat even 2-3 gels per-hour are not the complete solution.

Tiny niggle aside (who relies on their gels for rehydration strategy anyway?) MuleBar Kick Gels have a great deal to recommend about them. Boxes of 12 are £19, boxes of 24 gels £38 Ė further details and online purchase at mulebar.com