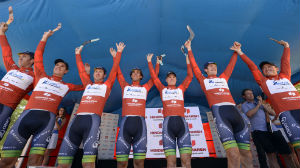 Australia’s Simon Gerrans has won a record third Tour Down Under, beating fellow countryman Cadel Evans by a mere one second at the traditional UCI WorldTour season-opener; a victory made all the more sweet for having taken place on Australia Day and whilst riding for Australian team Orica GreenEDGE.

Gerrans had gained his overall one second lead the previous day and finished in Adelaide on the same time as André Greipel (Lotto-Belisol), who beat Mark Renshaw (Belkin) and Andrew Fenn (Omega Pharma-Quickstep) in the Stage Six sprint. Commenting on his historic victory Gerrans said, ‘The guys did a fantastic job, they kept me right at the front and out of trouble, so it worked out beautifully. It’s a huge honour to win the Tour Down Under. For it to be on Australia Day and racing for an Australia team, it just doesn’t get much better… I guess today’s win is a combination of relief and excitement.’