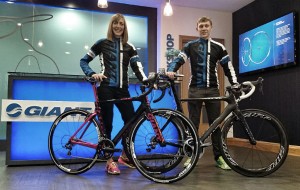 Racetime Events, a Leicestershire-based multisport events company, who have their own high performance Race Team, have announced that they have a new bike partner, and will be supported by Giant Bikes this year. The partnership will see the majority of the team riding the Giant range; including current World U23 Duathlon Champion Rich Horton, Britains No2 ranked Junior James Teagle and Kona Ironman World Championship qualifier Claire Shea-Simonds.

Team manager Johnny Nicol commented on the new deal, saying, ‘I am thrilled to partner Giant for 2014. I have ridden Giant bikes myself since starting in Triathlon 10 years ago and never been disappointed. The partnership shows how far the team has come in a short space of time to be joining forces with one of the best known brands not only the Uk but the World. Our athletes race at the highest level in the British Elite Super Series and National/World Championship events so to have the best equipment is essential.’

Head of Finance and Operations at Giant Bikes Aaron Bargewell added, ‘I am delighted to be able to announce the partnership between Giant and Racetime events for the upcoming season. Their results and progress have been outstanding, so being able to become a part of their growth is an opportunity that we couldn’t miss out on and we look forward to achieving greater things in 2014.’