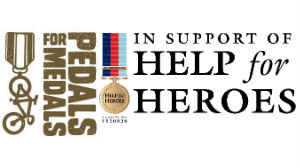 On May 1 Pedals for Medals, a group of amateur cyclists including ex-army, navy and ‘civvies’, will set off on a non-stop cycling challenge from the Imperial War Museum in Manchester to Gibraltar to raise money for Help for Heroes. Riding in two rotating groups of four and completing around 60miles every four-hour shift, the team hope to cover the 1683miles in an impressive five days. Pedals for Medals organiser Matt Lavery, who spent 10 years as a Marine, comments, ‘This event will be extremely tough, but it will be nothing compared to what our injured service personnel have given.’

Help for Heroes was established to provide support for servicemen and women who suffers life changing injuries in the line of duty and their work has attracted the support of a number of high-profile sporting greats including Mark Cavendish.

Andy Shears, one of the Pedals for Medals team who has also competed for GB Age Group in triathlon, says of the tasks ahead: ‘When I think how fortunate we are to be able to undertake such a challenge, with no disability to worry about, only our fully functioning mind and body, it really focuses on the issues our servicemen and women have to overcome. Help for Heroes is such a deserving cause and it is a pleasure to be able to contribute in some small way to provide a financial contribution to the charity.’

Further details of the Pedals for Medals challenge can be found at pedalsformedals.com and you can donate directly to them via bmycharity.com