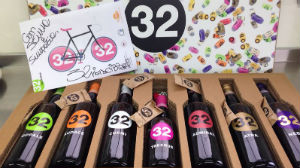 As unlikely as it sounds Tinkoff-Saxo have signed a sponsorship deal with Italian gourmet brewery 32 Via dei Birrai, which the team are quick to point out is just as much for the hard working staff as it is for the riders who they otherwise describe as ‘the monks of the sporting world’. Loreno Michielin, Manager at the brewery – the first Italian artisan microbrewery – commented: ‘There has to be room for pleasure once in a while, also on a WorldTour team. That’s why we wanted to support Tinkoff-Saxo. Our brewery is situated in the heart of Italian cycling-country and we follow the sport closely…’

Given the gruelling schedule for both riders and support staff alike, perhaps we shouldn’t begrudge them the odd drink (the early Grand Tours were renowned for their vino filled bidons after all.) Tinkoff-Saxo’s Team Chef Hannah Grant certainly seems to appreciate to: ‘You recognize good quality when you taste it. Italy is known for its wine, but 32 Via dei Birrai definitely puts Italy on the beer-map. During the Giro and Dauphiné we’ve found out that sharing a bottle of 32 Via dei Birrai became some kind of a rallying point for the staff in the late hours after finishing the preparations ahead of the next day’s stage.’

More on Tinkoff-Saxo at tinkoffsaxo.com

Perhaps more importantly more on 32 Via dei Birrai at 32viadeibirrai.it