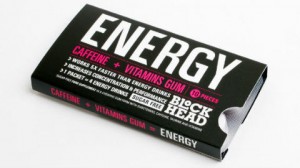 There are times on the longer training sessions or endurance races when a caffeine shot seems like just the thing. But with cans of energy drinks, let alone a nice tall latte or espresso shot, rarely convenient/possible BLOCKHEAD could be a solution.

BLOCKHEAD is a new compressed energy gum, the creation of British sport scientist, Danny Lowe, who applied his knowledge of absorption methods to create a product that reportedly works five-times faster than caffeinated energy drinks. Each pack contains ten pieces, with each delivering 32mg of caffeine which, because its absorbed orally via the buccal mucosa membranes in the mouth rather than in the digestive tract and stomach, gets to work within around five to ten minutes of chewing (compared to 25-45minutes with most caffeinated drinks.)

The BLOCKHEAD taste starts not unlike a ‘traditional’ chewing gum flavour (sort of generic fruit) but quickly deteriorates into bitterness, not entirely pleasant and, in fact, not worse than some energy shot drinks. On test rides there was a noticeable caffeine buzz within 15minutes and under slightly stricter test control raised the resting heart rate by 20% within 10minutes and a fairly sustained 25% within 15minutes.

Caffeine is certainly proven to increase alertness but technically only improves endurance performance in high doses – around 3-6mg per kg of body weight – and as the maximum recommended daily consumption of BLOCKHEAD is three pieces (96mg) there’s probably only marginal gains to be had here. That said, the recommended daily allowance may be erring on the side of caution when you consider that a 250ml can of Red Bull – to take the market leader as a fairly representative example – contains 80mg of caffeine, which the Food Standards Agency suggests is: ‘the same as three cans of cola or a mug of instant coffee.’

Arguably there are other benefits to caffeine – and by association BLOCKHEAD – some (relatively small-scale) studies suggest that caffeine at doses around those found in a single espresso (70-80mg) have a positive effect on both lactic acid build-up and VO2 levels – basically the rate at which the body can absorb oxygen.

BLOCKHEAD, which is sugar-free, also packs in vitamins B3 (as niacin), B6 and B12 (all at 15% RDA per piece), along with taurine, an amino acid that, amongst other things, helps regulate the level of water and mineral salts in the blood.

Some confusion creeps in with BLOCKHEAD with the mint flavour – which does a better initial job of disguising the bitter taste – as each piece contains an increased 50mg of caffeine and the recommended daily consumption is listed as four pieces. At 200mg total that’s double the recommendation of the standard flavour…

Whatever the evidence – or exact levels required – the fact is that many rely on the occasional caffeine shot to get through training or racing (or simply the day) and BLOCKHEAD, with its fast absorption rate, offers an incredibly convenient way of doing it.

Single packs of BLOCKHEAD retail at Ł1.95, with cartons of 18 packs available at Ł28.08

Further details and online purchase of BLOCKHEAD at block-head.com