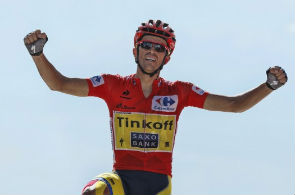 Alberto Contador has claimed victory at the Vuelta a Espana for the third time after previous wins in 2008 and 2012. The Spaniard had all but secured the win after Saturday’s penultimate stage when the Tinkoff-Saxo rider left nearest rival Chris Froome considerably adrift. Contador concluded the 2014 Vuelta in a time of 81hr 25’ 05”, with Froome on +1:10″ and third-placed Alejandro Valverde of Movistar on +1:50″. The win marks Contador’s sixth Grand Tour win.

An unusually modest Contador commented: ‘It’s a dream for me to win three Vueltas, I really was not expecting it.’ Tinkoff-Saxo’s DS, Steven De Jongh, added more expansively: ‘It’s simply as astonishing achievement by Alberto. Coming back from an injury like that after declaring himself out a couple of weeks before the Vuelta and not only rides well but takes the win, is just amazing. We entered the race hoping that we could get a stage win in the last week of the race but as the race progressed and Alberto felt stronger by the day, we had to change strategy and go for the overall classification.’