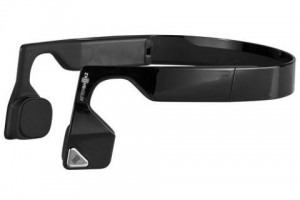 When Cyclo first looked at the AfterShokz Sportz 2 Headphones almost two years ago we were suitably impressed by the bone conduction technology that both sets them apart from other sports ‘phones and by the additional safety that they offered. Now though there are the AfterShokz Bluez 2 to consider…

The tech first: unlike conventional headphones the AfterShokz Bluez 2 and their predecessors use bone conduction technology to deliver sound through the user’s cheekbones to the inner ear, a technique that leaves the ears open to ambient sound with obvious safety advantages when it comes to listening to music on the bike. Of course the use of MP3s on the ride is a divisive issue, but if you’re going to do it there’s arguably no safer way than with the Bluez 2.

To use the tech for the first time is something of a revelation – if you’re expecting metallic vibration like picking up radio through a filling you’re in for a huge surprise; the sound – from deep bass to high-ends – is remarkably clear with little discernable difference from in-ear options and there’s really no learning curve when it comes to effectively listening to two things at the same time.

The AfterShokz Bluez 2 are wireless Bluetooth with a charging time of around 2 hours (via mini USB) that promise approximately 6 hours of playback – on test we were certainly getting close to this time, although as with most rechargeable tech this is likely to drop off a little over time and extended use.

The headphones are held in place via a one-piece wraparound headband that sits at the back of the head, drapes casually over the ears without adding pressure, and holds the headphones gently against the cheeks. An optional tension band can be added at the back for both stability and for those with smaller heads. The 45g weight feels heavy in the hand – certainly in comparison to traditional bud earphones – but once on and correctly positioned they proved perfectly comfortable on the bike. Getting everything snug under a helmet (assuming you’re not daft enough to ride sans lid and listening to music) takes a little wiggle but, once sorted, is barely noticeable.

The controls on the AfterShokz Bluez 2 do however take a little getting used to. Volume and power / Bluetooth pairing buttons sit under the right ‘arm’ whilst the multifunction button (MFB) is over the left cheek. The MFB is used for a host of functions from skipping tracks to answering calls on a connected phone, we found that using it for basic functions – like pausing the music – worked just fine, but trying to learn the more complex clicking-combinations (answering a second incoming call, whilst putting the first on hold) was beyond both our ability and desire. Definitely pure user incompetence rather then tech-fail, but as we don’t work in a call centre we won’t sweat the fact that this function will be forever beyond us.

The AfterShokz Bluez 2 pack in a huge amount of technology and innovation from the ‘Audrey Says’ voice prompting to the brilliantly named ‘LeakSlayer’, which helps reduce that annoying (to everyone else) music leakage from headphones – something you might imaging is compounded by bone conduction but isn’t.

Even if you only use the basic functionality of the AfterShokz Bluez 2 there is much to recommend them; beyond the great sound quality, improved aesthetics, and Bluetooth convenience it’s the added safety of ‘open ear’ music enjoyment on the bike that’s really likely to appeals.

The AfterShokz Bluez 2 retails at Ł89.95 with further details and online purchase at aftershokz.co.uk

Read the Cyclo review of the AfterShokz Sportz 2 here.