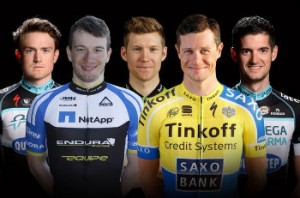 Andrew Fenn (GB) – Fenn joins Team Sky after three years in the professional ranks. In 2012, his debut season as a pro, he won back-to-back victories at the Trofeo Palma and Trofeo Migjorn in Mallorca. Winner of the junior Paris-Roubaix in 2008, Fenn is a powerful rider with a fast finish and is well suited to the Classics.

Leopold König (Czech Rebublic) – One of the biggest up-and-coming talents in the sport, König recently securing a seventh-place finish at this year’s Tour de France. His climbing and time trial abilities make him an all-rounder, with stage victories at the Vuelta a Espana, Tour of California and Tour of Britain.

Lars Petter Nordhaug (Norway) – Nordhaug returns to Team Sky after two years away. A founding member of the team in 2010, the Norwegian is an accomplished climber and his attacking style invariably sees him battling it out for victory at the end of races.

Wout Poels (Holland) – Set to be the first Dutchman to ride for Team Sky, Poels is another accomplished climber with experience of all three Grand Tours. He has taken stage victories at high-profile races including the Vuelta al Pais Vasco, the Tour of Britain and Tour de Luxembourg during his six-year pro career.

Nicolas Roche (Republic of Ireland) – With 13 Grand Tour appearances to him name Roche has experience in abundance and will significantly add to Team Sky’s climbing powers. In 2013 he finished in fifth place at the Vuelta a Espana, this year he claimed victory in the Route du Sud and claimed a fifth place finish in the 2014 Tour of Britain.

Team Principal Sir Dave Brailsford says of the signings: ‘We’ve signed five quality riders for next season and each one of them will help strengthen and enhance the squad. We’ve always set our standards high and been very ambitious with our goals. We want to win the biggest races and constantly improve as a team and these new riders have the proven experience and developing talent to perform now and in the future… We have a strong nucleus of riders at Team Sky and these signings will be excellent additions to the squad. They all bring their own qualities and we’re looking forward to welcoming them to the team and seeing them in action next season.”