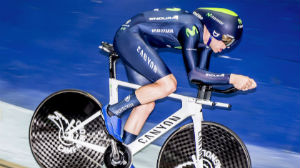 GB’s Alex Dowsett has broken the UCI Hour Record, reaching 52.937km as the hour mark passed. The Movistar rider finally got his attempt underway, after postponement due to injury, at the Manchester Velodrome. The move to the ‘fast’ National Cycling Centre’s track paid off, as Dowsett completed over 211 laps inside the time limit.

The 26-year-old Commonwealth Time Trial champion became the fourth person to break the record in the last eight months and beat current holder Rohan Dennis’s mark by over 400 metres.

Dowsett, sat behind Dennis’s record schedule for most of the ride and was nine seconds down at one point, subsequently revealed that his plan was to be riding in deficit and have ‘enough in the tank’ for the final ten minutes. While Dennis faded towards the end of his record run, Dowsett continued his charge to the end.

Dowsett said immediately after his ride, ‘I was expecting it to be horrific, but it was just terrible.’ He has already confirmed that he may make another attempt at the record sometime after June 7, the date pencilled in for a Bradley Wiggins shot at what is becoming an essential gong for the world’s top cyclists.