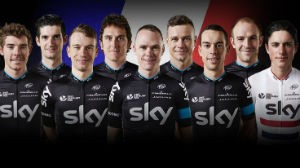 Froome comments: æLast yearÆs disappointment is this yearÆs motivation for Team Sky. From the moment I crashed out in 2014 IÆve had the burning desire to get back to this yearÆs Tour in the best possible shape. IÆm ready and IÆm fortunate to have a strong team around me selected to meet the many different challenges of this yearÆs race ¢ from the cobbles to the climbs. ThereÆs a great spirit in the group and weÆre ready to give our best for every kilometre of every day over the three weeks of the Tour. WeÆre counting down the days. We canÆt wait to get started and we are up for the challenge ahead.Æ

Speaking about the Tour de France line-up Team Sky Principal, Sir Dave Brailsford, said: æThe Tour is shaping up to be one of the most exciting in years and weÆve chosen a team of talented riders for the race. We’ve studied this yearÆs route carefully and have selected the riders who we believe will best deliver our race strategy. Inevitably it is always a difficult decision. We’re all looking forward to a great race and we have a strong team ¢ led by Chris Froome ¢ thatÆs hungry for success… IÆm confident that Team Sky will be competitive but of course we can take nothing for granted. One thing we can say for certain is that itÆs going to be a great contest and a great three weeks of racing for the fans. That is fantastic for the sport of cycling.”

The Team Sky squad for the 2015 Tour de France:

Chris Froome, Great Britain – The 2013 race winner will lead Team SkyÆs challenge over the three weeks as he bids to recapture his Tour crown. After putting a crash in last year’s event behind him, Froome will look to continue his momentum following an impressive recent win at the Criterium du Dauphine. A gifted climber and powerful time trialist, he has all the skills to win the world’s biggest bike race.

Richie Porte, Australia – One of the finest and most feared climbers in the peloton, the Tasmanian began the year in scintillating form, winning Paris-Nice, Volta a Catalunya and the Giro del Trentino back to back. Disappointment followed in May at the Giro dÆItalia, as he was forced to withdraw from the race due to injury. Now back to full fitness Porte will be raring to go heading into his fifth Tour de France.

Geraint Thomas, Great Britain – Following the best start to a season of his career to date, Thomas lines up for his sixth Tour de France full of confidence. Whether claiming wins in tough Belgian one-day classics like E3 Harelbeke or climbing at the sharp end of mountainous stage races, ‘G’ can do it all. With overall victory at the Volta ao Algarve and second place at the Tour de Suisse his all-round credentials are unquestioned.

Peter Kennaugh, Great Britain – Hailing from the Isle of Man, Kennaugh lines up for his second Tour de France appearance off the back of another strong season. After 12 eye-catching months in the British national championÆs jersey, which he successfully defended in Lincoln yesterday, Peter has various other victories on his palmares, and earned himself a stint in the leader’s jersey at this year’s Criterium du Dauphine.

Ian Stannard, Great Britain – Few riders possess the combination of horsepower and heart that characterise Ian Stannard. The Brit is a huge asset on the flat but is comfortable setting a fierce pace on the climbs. With a second victory at Omloop Het Nieuwsblad already in his pocket this season, Stannard will be hoping to repeat his Tour outing from 2013 where he helped Froome to victory.

Luke Rowe, Great Britain – After coming through the ranks as part of British CyclingÆs Academy the talented Welshman has spent all of his four pro seasons with Team Sky. In that time he has developed into one of the finest and most respected young riders in the sport, and is rewarded with his Tour debut. This year Rowe has taken a top 10 at Paris-Roubaix and contributed to wins at both Paris-Nice and the Dauphine.

Nicolas Roche, Ireland – Strong, accomplished and experienced at the highest level, Roche has been part of a number of high-profile victories since joining Team Sky this season. Comfortable setting tempo on the climbs, the Irishman finished fifth in his own right at the Vuelta a Espana in 2013. Roche has 13 Grand Tours starts to his name and has completed each one, including the last six editions of the Tour de France.

Leopold K÷nig, Czech Republic – The Czech climbing star rode to a superb seventh place overall in the 2014 edition of the Tour as he made his debut in the event. He improved on that Grand Tour milestone in Team Sky colours this year with sixth place at the Giro dÆItalia. Now rested ahead of the race start, K÷nig will significantly add to the teamÆs firepower in the mountains.

Wout Poels, Holland – The Dutchman has impressed greatly since joining the team at the start of 2015. Elite climbing prowess makes him invaluable in the high mountains, yet Poels has also shown he is capable of winning in his own right after a classy stage victory at Tirreno-Adriatico in March. After returning from shoulder surgery Poels was a key part of the team’s Dauphine success.