Le Tour One Day Ahead – Part 1 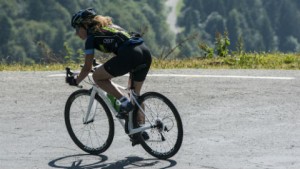 Le Tour One Day Ahead, an ambitious charity ride covering the full 3,344km 2015 Tour de France route with ambitions to raise Ł1m for Cure Leukaemia, captured the public imagination this summer. Amongst those taking part was ex-British triathlete Helen Russell (Gold medallist – 2011 ITU World Sprint Duathlon) and here, in the first of a three-part series, she shares her experience with Cyclo.

After cycling just over 2,000miles, including 40,000meters of ascent and burning an estimated 95,000calories I am back home in the UK having completed the Le Tour-One Day Ahead challenge for Cure Leukaemia. It was without doubt the hardest thing I have ever done and was a struggle both physically and mentally – not helped by the fact that I needed ten stitches on only the second stage! The first week of this year’s Tour de France was touted as being one of the hardest for years-and I can vouch for that…

The Tour started in the Dutch town of Utrecht with a leisurely team ride around the 13.8km opening prologue. If only each stage could be so easy! On paper the next day looked like it would be an easy first long stage, with a typical Dutch flat profile, but things don’t always turn out as anticipated. Unfortunately at about 100km into the stage one of my team members got their wheel caught in a bridge extension track near the town of Hellevoetsluis and came down bringing another rider and myself down. I landed on the second rider’s disk brake, which sliced open my thigh. 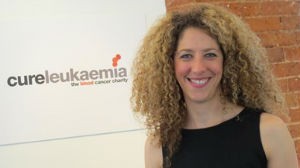 I looked down and could see that the injury was serious and thought that my One Day Ahead ride was over before it had even started. However, the team medic reassured me that he could get me riding again and gave me ten stiches in the mechanics van at the side of the road. I don’t think he quite expected me to be riding again quite so soon, as I insisted that I get immediately back on the bike to finish the stage. I just thought of all the people that had sponsored me and didn’t want to let them down. I was allowed to get back in the saddle, but only on the proviso that if I felt any tugging on the stiches – or if the wound started to bleed – that I would have to dismount.

I think I rode the rest of the stage on pure adrenaline; there was no way that I was not going to finish the first long day. I was, however, dreading the next morning when the adrenaline would have worn off and a decision would be made as to whether I could continue. I was relieved to have good travel insurance with SportsCover Direct, as I knew that if there were any complications or if I needed to seek extra medical treatment or even be sent home I was covered…

Due to the excellent work of the medic I was given the go ahead to start the following day and thanks to the rest of the team, who looked after me and kept to a slower pace, I was able to finish the stage up the infamous Mur de Huy or ‘Huy Wall’ – a 1.3km climb with a peak gradient of 25%.

Stage four was a stage that I had been very nervous about for weeks as, at 223.5km, it was the longest leg – but not only that-there was also the small matter of seven cobbled sections!

Not surprisingly the organisers were concerned about me riding the cobbles as a fall would almost certainly result in me going home. However, for me this was such an iconic stage that I really wanted to conquer it so it was agreed that I could attempt the first cobbled section and, if I handled it well and felt comfortable, then I could tackle the other sections. I had been told that the best way to ride cobbles is to attack them, ride quickly and don’t hold on too tight. I was already feeling angry about my injury and therefore channelled it into riding aggressively and much to my surprise I enjoyed the cobbles and felt confident, which meant that I could continue to the stage finish. I was grateful to have been given in advance the advice of wearing two pairs of mitts over the cobbles, as the constant friction had caused many in the team to get blisters.

After the cobbles my body was feeling very tired going into stage five (Arras to Amiens.) That evening my partner arrived for two nights and it was so good to receive a big hug and some TLC! It was just the lift I needed after a tough few days.

Abbeville to Le Havre saw the first rain of the Tour and the coastal route meant that there was a very strong crosswind, resulting in a tough stage.

Stage seven was relatively flat; starting from the cheese producing town of Livarot and going through rural villages and over rolling hills to Fougeres. Stage eight from Rennes to Mur-de-Bretagne was another rolling stage, with only two category climbs. However, one of them was at the end of the stage and after 180km in 35degree heat the 1.3km at an average of 8.4% was a real challenge. Still, the short 28km time trial from Vannes to Plumelec the next day offered welcome respite from the long stages and the team used it as an opportunity to recover. We headed out early as we had a long coach transfer to the Pyrenees, which was actually harder than the day’s ride! 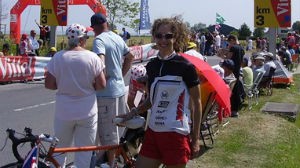 I was looking forward to my first day in the Pyrenees, as I usually love mountain climbing. However, I got a shock when we reached the first mountain stage finish at the Hors Category Col du Soudet, making its debut appearance in the Tour de France. I didn’t have as many gears as I usually use in the mountains and felt like I was grinding all the way up the 15km climb. I just couldn’t get into my normal rhythm and contemplated getting off the bike a few times. However that morning we had seen a video message from Leukaemia patients at the Clinical Centre for Excellence at the Queen Elizabeth Hospital in Birmingham and I knew that the pain they had been through and in many cases are still going through, was much worse than what I was feeling and so kept on grinding to the summit, where my frustration took over and I broke down in tears. That evening the team’s mechanics realised that if I were to survive the rest of the Pyrenees then I would need some extra gears and so, much to my relief, changed the gearing.

The next morning there was a sense of trepidation on the team bus as we would be climbing the infamous cols of the Aspin and the Tourmalet. After my struggle up the Soudet I was really hoping that the extra gears would make a difference.

We reached the Category 1 Col d’Aspin in the afternoon and much to my relief the new gearing meant that I was able to comfortably reach the summit. The second major climb of the day was the Hors Category Tourmalet – at 17.1km at a gradient of 7.3% it is a legendry mountain of the Tour de France. Lots of the cols have kilometre markers that count down how far you have left until the summit. I focussed on reaching the various landmarks of the climb, including snow protection tunnels, hotels and shops whilst counting down those markers… As we rode into the finish at Cauterets we had conquered six categorised climbs!

On the final day in the Pyrenees we were due to climb three cols and tackle our second mountain summit finish. However, after climbing the Porte d’Aspet and the Col de la Core we were informed that the Port de Lers was closed due to someone sprinkling tacks on the descent and therefore we wouldn’t be able to do the climb. I was absolutely shattered at this stage and when given the option of going up an alternative col or heading straight to the final col I took the latter option and joined the others in the team who had ridden the alternative col at the foot of the Plateau de Beille.

This was without doubt my favourite climb so far on the One Day Ahead challenge. Almost the entire route of the 15.8km climb was lined with spectators from all over the world encouraging us to keep going and many recognised us as being part of the ‘Geoff Thomas Challenge.’ There was an incredible party atmosphere with music and pop-up bars along the climb. I reached the top just after 8pm – it had been an incredibly long day but we were all excited and slightly anxious about what the following day and what our guest arrival would bring…

Part Two of Helen’s Le Tour One Day Ahead feature will be published on Cyclo soon – follow us on Twitter for all the latest news, plus feature and review alerts.

Further details of Le Tour One Day Ahead at beforethetour.com and, most importantly, you can help add to Helen’s incredible fundraising total for Cure Leukaemia by donating at JustGiving.