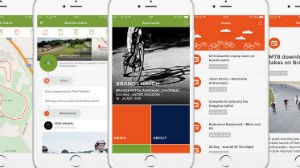 Revolve24 a global series of cycling relay races set at iconic motor circuits around the world has announced a partnership with Map My Tracks to bring cutting edge tech to the events. The official app gets the competition started ahead of the race by allowing competitors to compete for pole position on the grid and for the ‘bragging rights’ associated with pit garage No.1 ahead of the Grand ‘Le Mans style’ Start.

By linking their GPS performance data during training rides, grid positions will be calculated based on the miles covered, feet climbed and average speed achieved in the time leading up to the event. Once the red lights go out at the start of the race, real-time performance data, individual and team tracking information will be available enabling competitors to know where they stand in the race for King/Queen of The Mountains, Fastest Lap, Sprinter as well as Overall Champions.

Revolve24 kicks off in September at Brands Hatch and each race will see participants take on a 24-hour race in a team relay format on closed circuit race tracks that hold huge sporting heritage. Full details of Revolve24 at revolve24.com