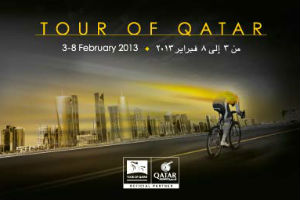 The 2013 Tour of Qatar starts tomorrow – Sunday February 3 – with six days of action that sees 18 teams and a total of 144 riders line up. Defending champion Tom Boonen, who has won the event an impressive four times, isn’t amongst the starters due to injury, replaced instead by Mark Cavendish making his début for Omega Pharma-QuickStep (just as he did for Team Sky at the start of the 2012 season). Cavendish is one of six British riders taking part, the others being Adam Blythe (BMC Racing), Russell Downing (NetApp-Endura) and the Team Sky trio of Luke Rowe, Ian Stannard and Geraint Thomas. For his part Cavendish will be hoping for better fortune than last year when a heavy crash on the final day’s sprint ended his contention.

This year’s Tour of Qatar will total 732.5km of cycling consisting of the following stages:

Further details and results on the official website letour.com