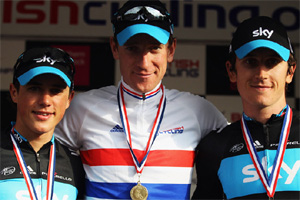 In a repeat of last year Sky Pro Cycling have taken the one, two and three at the British Road Race National Championships. In a blaze of glory across the 196km course Bradley Wiggins scored a solo win – his first – at Stamfordham, Northumberland, yesterday (Sunday, June 26) in a time of 4:41:08, holding back his team mates, Geraint Thomas and Peter Kennaugh, into second and third respectively – both on +30. The win means that Wiggins will now be entitled to wear the British Road Race National Champion’s jersey in the Tour de France, which begins Saturday July 2, in addition to the British Time Trial National Champion’s jersey.

In the under-23 event Scott Thwaites of Endura Racing took first with Andrew Fenn and Erick Rowsell following up.