Linus Gerdemann, a former Tour de France stage winner, has bagged the overall win at this year’s Tour of Luxembourg for Team Leopard-Trek although it was Romain Feillu (for Vacansoleil-DCM) who won the final stage in 3:42:06 with Fränk Schleck in second and Pieter Vanspeybrouck (Topsport Vlaanderen) third.

Meanwhile in France the Critérium du Dauphiné saw the 5.4km Prologue won by Rabobank’s Lars Boom, with the Dutchman setting a blistering time of 6:18 to dominate the 8day/stage opener. Britain’s Bradley Wiggins (Sky) took third with +05, whilst BMC’s Cadel Evans (something of an overall favourite and former runner up at the event 2007-2009) managed a respectable seventh on +09. Tomorrow (Monday June 6) the action moves on to the first “true” stage with the 144km Albertville to Saint-Pierre-de-Chartreuse stage. 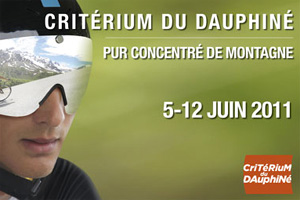 With the Tour of Luxembourg still in full flow, it’s an exciting weekend of pro-biking which also sees the start tomorrow (June 5) of the ever-exciting Critérium du Dauphiné; 8 days of action which is both something of a warm up for the Tour de France and a frequent indicator of those teams and riders likely to do well in the July Classic. The Critérium du Dauphiné – raced in the Dauphiné region of France – comprises a 5.4km Prologue ride followed by 7 days of stage racing over a total distance on 1,064km and includes an Individual Time Trial stage, which this year falls on Wednesday June 8 and takes place in Grenoble.

Cadel Evans, runner up in Dauphine between 2007 and 2009, and with an impressive 2011 season under his belt (winning both the Tirreno Adriatico and the Tour of Romandie) may well be the man to watch but, as always with the Critérium du Dauphiné, anything can happen during 8 days in the saddle…

The full stage breakdown is: