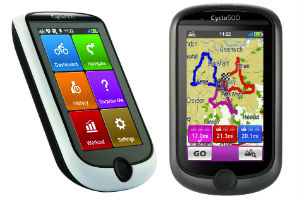 Mio have announced the launch of their new Mio Cyclo 500 range of cycling computers, set to hit the shelves in April. The range of lightweight (129g) devices will feature anti-glare capacitive touchscreens and incorporate Wi-Fi connectivity for PC-free linking to users’ MioShare™ accounts for effortless tracks and data transfer and synchronisation. Similarly, any route the user wants to save post-workout can simply be uploaded to MioShare, using the simple sync button. The series comes with the latest Mio Cyclo software, pre-installed maps (making them ready-to-go straight out of the box) and the unique Mio Surprise Me™ feature which suggests routes based on users favoured times or distances. Miro describe the new range as being, ‘…designed for both the performance driven cyclists and mountain bikers.’ with Piet Deschuymer, President of brand-owner MiTAC Europe commenting, ‘We are very proud to announce this innovative range, which has been created using feedback from our loyal users for some of its new features. We aim to bring technology of the future to the users of today, setting a new standard in the market, while staying with our initial core strategy: offering easy to use bicycle navigation.’