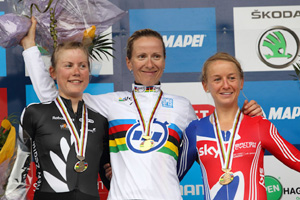 If reports in the Dutch magazine Wieler Revue are true then the future of British riders such as Lizzie Armitstead, Emma Pooley, Lucy Martin and Sharon Laws with Team Garmin-Cervélo could be in jeopardy with less than 9 months to go before the 2012 Olympics. According to the magazine the French firm BigMat were to have supported Garmin-Cervélo as a second tier sponsor but have now switched their wagons to join FDJ, the French cycling outfit, named for its title sponsor, the French national lottery. Whilst BigMat’s decision to back FDJ has seen their WorldTour licence returned for the 2012 season, the shortfall left at Garmin puts the future of their women’s team in doubt. The potentially dire news comes just weeks after former World Champion Emma Pooley publicly criticised the ongoing lack of a women’s team at Sky.